The number of people with cholera in Yemen is now the largest ever in any country in a single year since records began, Oxfam said today. At over 360,000 suspected cholera cases in just three months since the outbreak started, it is now already the largest number of cases in a year, topping the previous annual record of 340,311 in Haiti in 2011.

Though there are signs that the increase in numbers is slowing, the country’s rainy season from July to September will increase the risk of the disease spreading further. It is feared that the total number of people infected could eventually rise to over 600,000, making it one of the largest outbreak since records began in 1949.

Almost 2,000 people in Yemen have died from suspected cholera since late April this year and many more are now at risk, weakened by hunger, disease and the ongoing war.

The humanitarian situation continues to deteriorate with fuel shortages, rising food prices and a severe lack of basic services, such as health, water supply and education, making daily survival a painful struggle for millions.

More than 17 million Yemenis were already going hungry every day. Nearly 7 million of these people are starving – they don’t know where their next meal is coming from. Yemen was the poorest country in the Middle East and poverty and inequality was increasing.

• Over 4.5 million people are malnourished, including nearly half a million children who are in a life-threatening condition.

• Nearly 19 million people - 70 per cent of the population - need some sort of humanitarian aid.

• More than 3 million people have been forced to flee their homes due to the bombing and fighting.

• Over 46,000 people have been killed or injured since the escalation of the conflict in March 2015.

• A cholera outbreak has worsened significantly, with 2,000 suspected cases arising each day. There have been over 360,000 confirmed cases and near 2,000 deaths since April 2017.

"People desperately need food and water, medicine and health services, they need aid that can reach them - ultimately they need the conflict to end so they can rebuild their lives. All those fuelling Yemen's tragedy need to stop being arms brokers and start becoming peace brokers. The international community must redouble its efforts to help bring this crisis to a peaceful resolution."

Since July 2015, Oxfam has reached more than one million people in eight governorates of Yemen with water and sanitation services, cash assistance and food vouchers.

Oxfam has been working in Yemen for 30 years.

Bader*, 8 years old, has been living in the Huth IDP camp since he was displaced from Sa'ash. Huth camp for Internally Displaced Persons (IDPs). Oxfam has been working in the camp since late 2015, providing humanitarian assistance to displaced people with safe drinking water. Oxfam's hygiene and sanitation campaigns and public health promotion benefit over 53,000 people in Amran. *Name changed to protect identity

Ahmed and Dolah Ahmed, 45, and his wife Dolah, 40, live in Khamer city, in Amran Governorate with their eight children. Their only source of income is Ahmed’s work as a cobbler on the market. On good days, he manages to make 500 Yemeni Riyals (USD$2) a day, though he often comes back home empty-handed. ‘Our life has always been difficult, but it got worse after the war. Food prices went up because of the fuel shortage. On the market, you can see how many people struggle to buy food for their children,’ explains Dolah. ’Every month, we need to spend over 11,000 YER (USD$44) on flour. All we have to eat is bread and tea.’ Dolah goes begging at the market, hoping to collect some money or bread for the children, but she’s usually faced with verbal harassment there. Oxfam supported the family with food vouchers and cash transfers, which allow them to cope with the situation and to buy some food instead of getting debts. The family also used to suffer from the high prices of water, spending over 6000 YER ($24) a month on water. This problem has been solved since Oxfam rehabilitated the city’s water network. People can now have access to water in their own homes. Ahmed and Dolah hope that the war will stop soon so that their children can sleep safely instead of being hungry.

Marriam travels from Sabir Mount to the city centre to sell bread and earn an income. Most of the city’s bakeries have closed. Her grandchildren are reliant on her income after their parents died.

Ahmed Al-Haj stands outside his cafeteria in Taiz city. He closed his business during heavy clashes but has decided to re-open the café in order to earn an income. Taiz traders told Oxfam that they will be forced to close their shops and leave for more accessible areas if the situation does not improve in March.

A man transports food by donkey across the mountain to areas of Taiz cut off from many supplies. Traders in Taiz said that higher prices in active combat areas sometimes mean people are forced to travel long distances outside of the city to purchase commodities at a lower price. Many travel along treacherous mountain paths in order to avoid checkpoints. They return with the food ‘on their backs, exposing themselves to the risk of being shot by snipers’, one trader told Oxfam.

Umm Ayman from the city of Taiz carries her child Ayman as she searches Taiz’s cafes and restaurants for leftovers to feed her children. People in Taiz city, in the front line of the conflict, told Oxfam in February that there were no vegetables or infant formula milk available in the market, and reported that in some areas, food prices have increased by 200 per cent. Many said that they eat only one meal per day to leave enough food for their children. Some said they went without food for 36 hours during times of intense conflict. 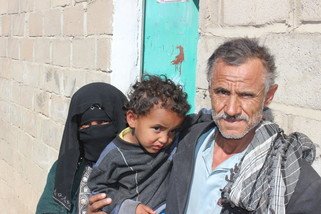 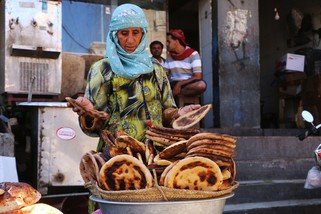 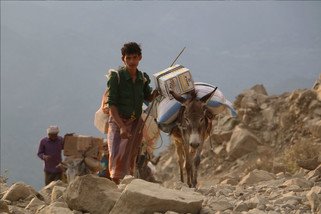 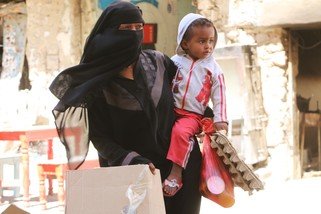