China and the Developing World

A technical workshop on how Civil Society Organisations (CSOs) can engage with the G20 was co-organised by the China Association for NGO Cooperation (CANGO) and Oxfam Hong Kong (OHK), and held in Beijing on 11-13 January, 2016. Over 90 participants from more than 50 Chinese NGOs participated in this workshop.

Mr. Huang Haoming, Secretary-General of CANGO; Steve Price-Thomas, Deputy Advocacy and Campaigns Director of Oxfam International; John Ruthrauff, Director of Interaction; and international representatives from the past three Civil Society 20 (C20) steering committees as well as experts from China’s G20 think tanks gave presentations on CSOs’ experience in the G20. Other speakers had a panel discussion on how Chinese CSOs can engage with the G20 in 2016. Participants then broke into working groups to identify priorities and initial plans on five individual themes: growth and Sustainable Development Goals (SDGs), gender, food security, climate change and energy, as well as green finance and sustainable trade and investment. The discussion was followed by three side events dedicated to the first three themes; at these events, Chinese CSOs discussed action plans on engaging with the G20 in China.

The G20 was set up as an informal forum and its mandate is to promote ‘open and constructive discussion between countries on key issues related to global economic stability’. The G20 meets annually, usually in the last quarter of the year. Presidency of the G20 rotates on an annual basis; China will chair the G20 for the first time in 2016. China started its presidency on 1 December, 2015, and will hold the Leaders’ Summit in Hangzhou in September this year.

At the 2010 G20 Summit in the Republic of Korea, a dialogue was held for the first time between Sherpas and civil society representatives in Incheon. In 2013, Russia institutionalised the C20 process, on a par with existing engagement groups such as the Think 20 (T20), Business 20 (B20) and Labour 20 (L20). The C20 process normally takes place months before the G20 Summit and is a meeting for policy dialogue between the political leaders of G20 countries and representatives of CSOs working on issues related to the agenda of the G20 Summit. The C20 process continued in Australia in 2014 and Turkey in 2015, where 16 NGO delegates from China took part and proactively participated in the policy recommendation discussion, especially in the areas of women employment, sustainable energy and inclusive growth. 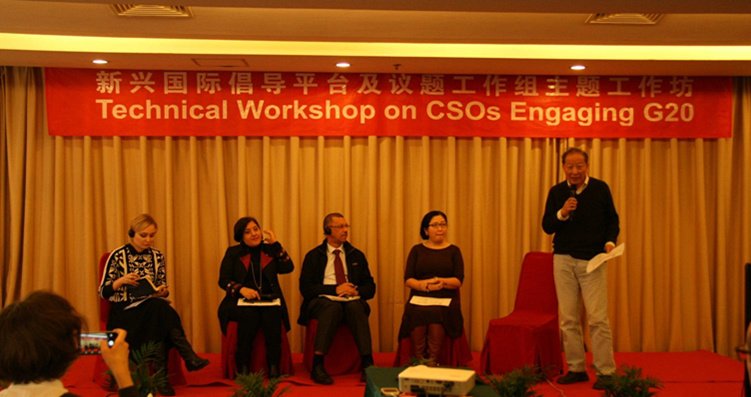 With OHK and CANGO’s support, the ‘Civil Society Engaging G20 Handbook’ was also released at the workshop for capacity building and to raise awareness.